I try to buy my food from local farmers or artisans. I’m so lucky to be living in Vermont – I actually have the choice.  Food prices are so high anyway, that buying organic and local is usually not too much more costly.

I have been stuck in the house for two days with a cold (eating in front of the computer and stressing out about finding a new job = bad ayurveda student) and this morning decided to bake.  Another reason for baking, besides craving cupcakes yesterday (not making cupcakes), is that I will be going to Jericho Settler’s Farm for their Winter CSA welcome potluck. YES, I decided to go for it! Jamie and I are splitting a large share with another couple. $480 for 4.5 months of veggies, split between 4 people = definitely doable.

Back to baking. I had everything I needed but butter.  Also not having cash for the general store, I had to run to Price Chopper. They’re undergoing a face lift, but not the good kind.  Just because they’re twice as big does not mean they’ll be making room for local produce. Well, I haven’t interviewed anyone, but I can guess…

I’ve heard quite a few people say ‘Don’t read that, you won’t be able to eat anything!’ when speaking of any book by Michael Pollan, and now numerous other authors.  They’re right, sort of. Walking down the aisles today I did not see much that I wanted to eat. I really didn’t see much of what I would consider to be food. It’s the first time I have really felt like this.   Still recovering from this cold, I only wanted to buy things I knew would help heal me. I didn’t feel that coming from anything off of the shelves.  I’ll admit that I did think about Annie’s mac n’cheese for a second, then remembered how much good food I would be eating later, and that this really would NOT make me feel better. 🙂

AT Price Chopper, they do not sell the Vermont Butter & Cheese Company butter – I would not have bought it anyway, because it is actually about twice as expensive as ‘regular’ butter. I would have settled for a nice Land O’ Lakes today for my baking.  They were offering 3 types of butter that was made from milk. Store brand, Land O’Lakes, and Organic Valley (located about 2 cooler doors down from the other butter.) They were offering 3 types of ‘spreadable’ soy butter, and about 7 types of margarine. I picked up the store brand of milk butter, and looked at the ingredients. I have never done this before.

In both store brand and Land O’Lakes were ‘natural flavoring.’ WHAT!? Butter is one of the purest foods on earth – Yes fattening, but it is supposed to be.  Why does it need extra oomph? (And please read this interview about natural flavoring, it’s creepy.)

So, I paid $1 more for the Organic Valley. I’m broke (soon to be unemployed), but the decision was easy since I was so infuriated that I almost swore out loud in the aisle. 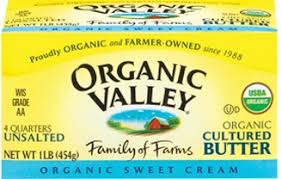 Will we stop craving fake foods simply because they (may) have more flavor? Along these same lines, I think we are tainting the term ‘natural’ by using it inappropriately. I, for one, don’t trust it any more.

Hi, I'm Adena Rose, and Awarenivore by Adena Rose Ayurveda is about sharing practical and authentic tools for self-healing. Healing is happening in our body all the time, we just need to learn how to plug in. Learn more...